Homepage About Us History

Istanbul; a multifaceted port city that is home to almost every element of gastronomy, design, crafts, music, and arts.

Karaköy, part of the Galata district originally settled by the Genoese in the 12th century, has been home to various cultures over centuries, including Jews, Genoese, Greeks, Romans, French, Venetians and Ottomans. 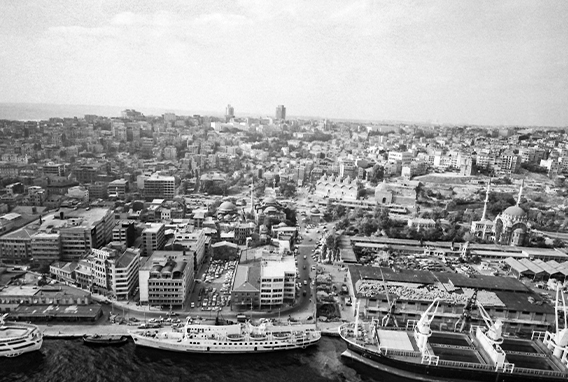 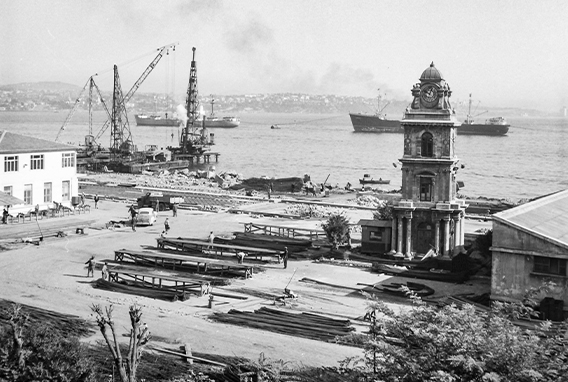 In 1826, Sultan Mahmud II commissioned architect Garabet Amira Balyan to construct the Nusretiye Mosque. The mosque is located where the Tophane-i Amire Arabacılar Kışlası Mosque, built by Selim III, once stood. Sultan Abdulmejid commissionedarchitect Garabet Balyan from the Balyan Family to build the Nusretiye Clock Tower, which would serve as a flag tower. The construction began in 1847 and lasted for a year.

In 1852, Tophane Pavilion is built by the British architect William James Smith during the reign of Sultan Abdulmejid. It is where the Sultan would later accept Grand Duke Konstantin Nikolayevich of Russia, younger brother of Tsar Alexander II, in 1858.

The Greco-Turkish war of 1897 is also formally ended with a peace treaty signed in the Tophane Pavilion in the presence of ambassadors of the Great Powers.

In 1892, the Pier is constructed, separating the area from the waterfront.

1910 - 1911; Çinili Han, the second building of the Pier complex, was built. It served as a passenger terminal before being transformed into a post office.

1912 - 1914; The third structure, Merkez Han was built at the end of the Pier. As the capacity of existing buildings could no longer meet the demand, a design competition is launched for a new terminal in 1936, and Karaköy Passenger Terminal was built between Çinili Han and Merkez Han in 1940.

In the 1950s, warehouses in Salıpazarı were completed, bringing the area to its final layout which remains virtually unchanged until 2013. The port was initially used for freighters until 1980s when it began serving cruise ships. The pier did not only accommodate ships and passengers. The port area housed the Ford Factory from 1925 to 1945.

In 1925, Henry Ford personally applied to the Ministry of Finance to ask permission to build a factory in Istanbul. The factory remained operational from 1929 to 1945. In 1990, discussions begun about the revitalization of the 1.2-kilometer coastline between Karaköy and Salıpazarı and the construction of a new passenger terminal.

Accordingly, Turkish Maritime Lines developed plans to privatize the existing warehouses and storage facilities through the transfer of operating rights.

After winning the Salıpazarı Port Tender, which was issued by the Privatization Administration on May 16, 2013, with a bid of USD 702 million, Doğuş Holding formed a partnership with BLG Capital, a Bilgili Holding affiliate, in January 2014. This partnership led to the founding of the joint venture company Salıpazarı Liman İşletmeciliği ve Yatırımları A.Ş. for the development and operation of the location.

The company assumed ownership of the port area in February 2014 and commenced operations after signing a transfer contract with Türkiye Denizcilik İşletmeleri A.Ş. The company was renamed to Galataport İstanbul Liman İşletmeciliği ve Yatırımları A.Ş. in February 2018.